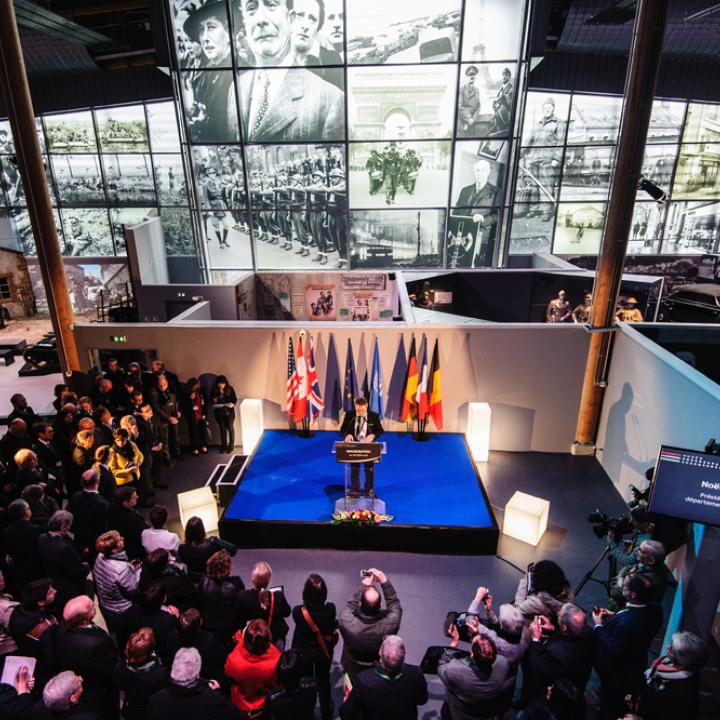 The Musée Guerre et Paix en Ardennes (Museum of War and Peace in the Ardennes) was inaugurated on Monday, January 22, 2018, in the presence of a North American delegation invited as guests of honour, numerous celebrities and almost 300 people.

After several months’ work on the site, resulting in a full renovation of its museographical aspects, the Musée Guerre et Paix en Ardennes was inaugurated on Monday January 22 on the 55th anniversary of the treaty of cooperation and friendship between France and Germany, signed at the Elysée by the German Chancellor Konrad Adenauer and President Charles de Gaulle. A powerful symbol for this new facility dedicated to history and remembrance in France’s Grand Est region, the purpose of which is to give meaning to the present with reference to the past. January 22, 1963, saw the laying of the foundations for a lasting and constructive peace after years of fratricidal warfare.

"This day, January 22, 2018, will forever be a historic date for our departmental institution and for our region, the Ardennes", stressed President Noël Bourgeois in his speech. "And perhaps further afield too, for our region and our country, as the level of interest generated by the inauguration of this museum of war and peace in the Ardennes extends beyond our borders and even those of Europe. [...] The Conseil départemental des Ardennes (Ardennes Departmental Council) hopes that this museum of war and peace will not only keep alive the memory of the last three conflicts to have ravaged our department, Europe and the world, but also teach current and future generations about the vital need to maintain peace, to prevent the threat of armed conflicts, to work together to achieve mutual understanding and to carry forward our shared values of civilisation and liberty".

For the occasion, a delegation of American and Canadian celebrities was invited by the Conseil Départemental des Ardennes, an initial step in establishing preferential relations with North American partners, focusing on the notions of "peace building - peace keeping" and remembrance related education.
The Museum of War and Peace in the Ardennes should go on to become a key port of call for American and Canadian tourists visiting Europe’s memorial sites, who are particularly receptive to the themes explored in this cultural establishment, one which features an ambitious message and a particularly inventive museography.

Another highly symbolic highlight was the broadcasting of a message of peace from UN Secretary-General Antonio Guterres during the official speeches, who passed on his greetings and his best wishes for the museum’s inauguration.  "It's by remembering our past that we can shape our future. Thank you for conveying the lessons of history to future generations".